It’s finals week for me. I’ve been working on projects and papers for the last few weeks, like you do when you’re a Ph.D. student. But today I hit a wall with my writing. The ideas were swirling in my head but refusing to cohere. So I decided that I would pull out my yoga mat and do a little bit of exercise to get my brain re-centered. (It’s remarkable how difficult it is for me to fit exercise in when I’m reading and writing, but that’s probably a different musing.)

So I had just finished my 20 minutes going through some basic moves to stretch out my legs and get the blood flowing faster through my brain. My cats had been very curious during my whole routine, especially during Savasana (the corpse pose), when they wandered all over me while I was laying down, and the final Half-Lotus, when they tried using my knees as scratching posts so that I would pay attention to them. Except I didn’t pay attention to them fast enough, apparently.

Just as I was getting up to put my mat away and head back to writing, I felt pine needles brush against me. Which was weird, since I had intentionally left enough space between me and out Christmas tree to avoid such an annoying sensation. And then my brain processed the crash and cracking of plastic breaking.

See, it is Christmas time. My sister brought home a pine tree earlier in the week in an effort to make out apartment more seasonal and smell outdoorsy. We bought new lights for this year (1 string of TARDIS lights; 1 string of small pearl lights). We even, finally, have a tree topper. And this is where I decided that the the cats were trying to be helpful, and not simply being cats making an attempt on my life.

Atop our tree is a Weeping Angel.

It has its eyes covered, but it’s still a little creepy. I mean, they always have their eyes covered – until they don’t and they’re sending you back in time. But it’s funny to both of us, so there it sits.

When the tree came down, the angel popped off and ended up sitting next to me. Staring away from me, but I would be lying if I didn’t have that thought for second that it had come to life. But it is plastic, and not stone, and survived the tumble with a crack towards its hem. Aside from that, the angel remained like me – unscathed.

Luckily, because it’s finals time, we haven’t completely decorated the tree. I don’t think it would’ve been as easy to get up surrounded by broken ornaments. But all’s well that ends well, and this time the ending is fine. The cats were trying to save me, and they didn’t end up inadvertently killing me in the process. Yay!

So now it’s back to the final pieces of the final projects. I think the exercise and then the excitement should help carry me through to the end. 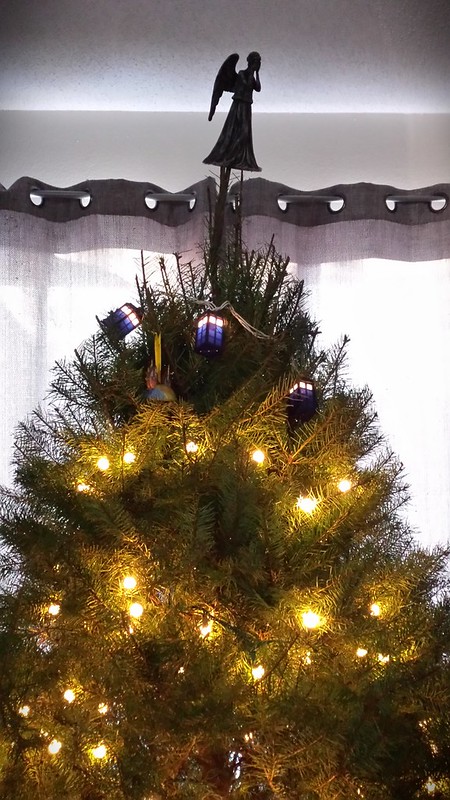